I have a few more simple Christmassy cards to share; these ones are kind of the opposite to the ones in the previous post. I had a large watercolour galaxy panel with white splatter (aka ‘stars’) all over it. I die cut three branches from the panel to pop up on three white card bases.

I realise now it would have been a good idea to take a photo of the panel before I cut it up. It was a panel I painted with brusho a while ago, a mix of blues and pinks, light in the centre and dark around the edges with white paint splattered over the whole thing. The holly is a PB die called ‘holly flourish’, the mistletoe is ‘berry flourish’.

After I had die cut all three branches I chose a shape die a little smaller than each of the branches so some foliage would hang over the edge. I die cut a shape from neenah solar white cardstock and from coloured adhesive backed foam. The foam pieces that pop up the white panels are either burgandy or navy to co-ordinate with the paint colours.

To assemble the cards I first glued the die cut to the white cardstock shape then snipped off and saved any bits hanging over the edge. Next I adhered the white panel to the foam and then all to the white card base. Once the popped up panel was in place I stuck the snipped off bits directly onto the card base lining them up with the rest of the die-cut.

I made all these cards into thank yous. I’m hoping to need many as I am once again participating in Dressember, and will be sending hand made cards to all who donate to the campaign. If you are new to my blog you might not know that I have twice before taken on the challenge of wearing a dress every day in December as part of a worldwide campaign to raise funds for and awareness about the fight to end modern day slavery. If you are interested in donating I have set up a CAMPAIGN PAGE  and I am posting photos on pinterest and instagram just so you can check up on me to make sure I’m wearing a dress each day! I have written a little more about Dressember on my other (sadly neglected) blog, Sentient.

This last branch die is called ‘winter berry branch’ also from Penny Black. The sentiment is from the ‘banner sentiments’ set and is stamped in chianti versafine clair ink.

And now a bonus card made with my last watercolour sky piece. I matted it on two sides with burgandy cardstock then cut a snow bank and the ‘deer in tree’ die from neenah solar white cardstock. It is a pretty die but would the deer be standing in a tree? I think not!

I have been asked a few times for a video showing how I use brusho for emboss resist panels. It is definitely one of my favourite techniques. I have used it with picture stamps and patterns, with one colour of paint powder or several; the principles are the same. I have added a list of emboss resist cards made with paint powders at the end of this post.

One key point to remember when using brusho over embossing is not to overdo the powder or the water. A little at a time means you can see what patterns and depth of colour are developing before you add anything more. In the video I show my method for moving colour around; I often pick up paint from an area with too much pigment and paint it somewhere else.

Obviously you if you sprinkle paint powder on a panel and then spritz with water it will not stay inside all the lines but that is part of the beauty of this technique. If this is a bit too loose and artsy for you try the same technique over an embossed pattern stamp.

Thank you for dropping by today; I hope the technique in the video is something you try one day. Let me know if you do; I’d love to hear or see how it went. 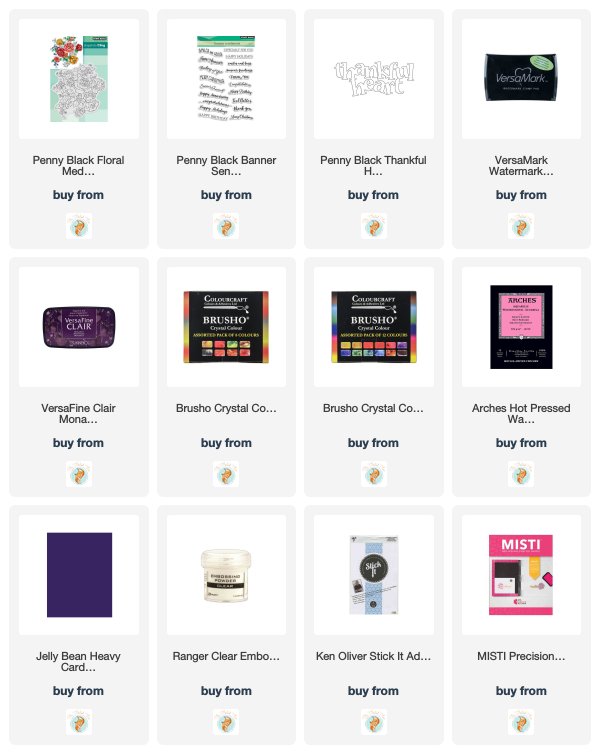 I still have a few flowers in my garden but it’s getting sparse in out there. The leaves have started falling but not with any real commitment yet. I chose an autumn colour scheme and kept my paint choices to a minimum. I used brusho ost blue, yellow and crimson brusho and did some mixing to get all the variation you see in the card.

I stamped the large floral image from the PB set ‘radiant’ in antique linen distress ink. It’s a pale water soluble ink which is perfect for watercolouring. I used a palette with my brusho paints for this card, dropping some brusho into a well then adding water. As I was using a circular palette I left spaces between the crimson, yellow and ost blue paint so I could create mixed colours in the spaces. I painted the small flowers yellow first then while the paint was wet dropped some orange (mixed from crimson and yellow brusho) onto the petals to show detail and shadow. The large flower is painted in a dark mixed orange. The leaves are painted with greens mixed from yellow and ost blue. The stamp set includes solid flower centres to be stamped after painting. I used the large one in the large flower but couldn’t find the smaller one so I dotted black ink with a marker. Later my dad found that tiny missing stamp which made me happy.

The sentiment is from the perspective set; I only inked part of it to get the exact wording I wanted. To finish off I matted with a rust cardstock and attached to a natural white card base.

The first card I made using this lovely rose stamp from My Favorite Things featured bister powder; this one was done with a couple of brusho colours. I used the same technique for both and have been asked several times about the amount of powder and the amount of water. I hope to do a video soon showing my method with paint powders.

I used two colours on this panel, a red and a yellow. You can see there are some specs of blue also, I think they were on the surrounding scrap paper and just transferred to my panel. I embossed the roses all over stamp with clear powder on hot pressed watercolour paper then sprinkled red brusho in the centre and yellow brusho on the edge of the panel. I spritzed with water then tilted the panel to activate the powder. Where there was too much water or colour I used either a paper towel or a ‘thirsty brush’ to sop it up. (A thirsty brush is a paintbrush dipped in water then squeezed or dabbed dry so that it can absorb water or paint from the painting.)

I cut three layers of the rusty red cardstock with the ‘bloom magical’ die and stacked them. The sentiment from the PB ‘friendship flowers’ set works perfectly with the die so I stamped in black and slipped it under the stacked die cut.

Have a wonderful day.

Does that background look a little skewed to you? It’s that exact feature that made me use it for an ‘eye sight’ themed card, something you might have to look at with your head on the side.

I taped the zigs & zags stencil from Penny Black onto a piece of hot pressed watercolour paper then spread deco transfer gel over. I carefully removed the stencil and let the gel dry. Once dry I lay a piece of white foil over the panel and ran it through my minc foiling machine. The result was a white on off-white chevron panel. Because I had created it on watercolour paper I was able to use brusho and a spritzer to make a multicoloured pattern. Once the panel dried and I decided on the ‘spectacle & eyesight’ theme. I wanted the die cut glasses to look a little fancy so I added adhesive sheet to the back of black cardstock then cut three pairs of glasses. I was just going to emboss them with clear powder but thought sparkly clear powder might be even better. After adhering the three die cuts together in a stack I pressed the top layer onto my versamark ink then dipped it in WOW clear sparkle powder. Even though the powder is clear it ended with a slight green sparkle to it. It looks a little different depending what base colour you emboss over. I pressed the glasses onto my versamark again and embossed in clear powder over the top of the sparkle.

My sentiment is just one of the eyesight themed sentiments in the ‘perspective’ transparent set from Penny Black. To complete the card I matted the zig zag panel in a co-ordinating colour, attached the sentiment then the glasses and attached it all to a white card base. Not my usual style but I had a lot of fun putting it together.

This week I have a couple of painted die cut cards to share. To create this one I first sprinkled leaf green, sunburst yellow and rose red brusho over a piece of hot pressed watercolour paper and spritzed with water to activate the paint. The colours did blend together a little but I was able to keep some distinct red, yellow and green areas. Once dry I used the ‘bodacious’ die from Penny Black to cut several flowers. I also cut white flowers with the same die. When creating my layout I glued down a few white diecut flowers first then coloured ones over the top. I trimmed stems and buds so I could arrange the flowers at different heights and facing different directions.

I embossed a sentiment from the ‘smile today’ set in platinum, trimmed the white background panel and attached it to a white card base.