I was happy to read in the comments that I am not the only one who hasn’t sent all their Christmas cards yet. I am making progress; I’ve written 67, sent 60 and have 12 left to write. The card I’m sharing today shows a little sentiment splicing; I’ve taken the ‘wishing you’ from the festive snippets set and added it to half of a stamp from the festive cheer set. The lettering in the two sets combine nicely along with the small capitals on the little words. You can get more from your stamps if you take a look at which sentiments might mix and match with each other. A stamp positioning tool makes this kind of thing easier but partial inking and masking works if you don’t have a handy dandy tool.

The landscape for this card was definitely a brusho experiment. I sprinkled blue and green brusho on my watercolour panel then moved water around with a paintbrush to create some hard edges and feather out other areas. After I’d created my misty mountains I did partial inking on the little tree stamp from the prancers set to fill in some forest on the mountain sides.

A night of woodland beauty

This week I am sharing my top three tree stamps from Penny Black’s new ‘Magic of the Season’ release. You know I love tree stamps so you wont be surprised that they were the first image I looked for when the new release arrived. The pretty spruce silhouette stamp immediately caught my eye and I knew it would be in my top three tree stamps. I have four stamped landscape cards to share this week and this little tree stamp features twice, today in a night time snowscape and tomorrow in a day time scene.

You will probably recognise another favourite tree stamp of mine in the background of this scene, it’s the little tree from the ‘Prancers’ set. I created a video to show you how I made this scene which features some watercolour effects along side some pigment ink stamping. I chose to pair pigment inks, which are waterproof, with watercolour painting so I could have pretty blends in the sky and snow but sharp tree images in the foreground and background. 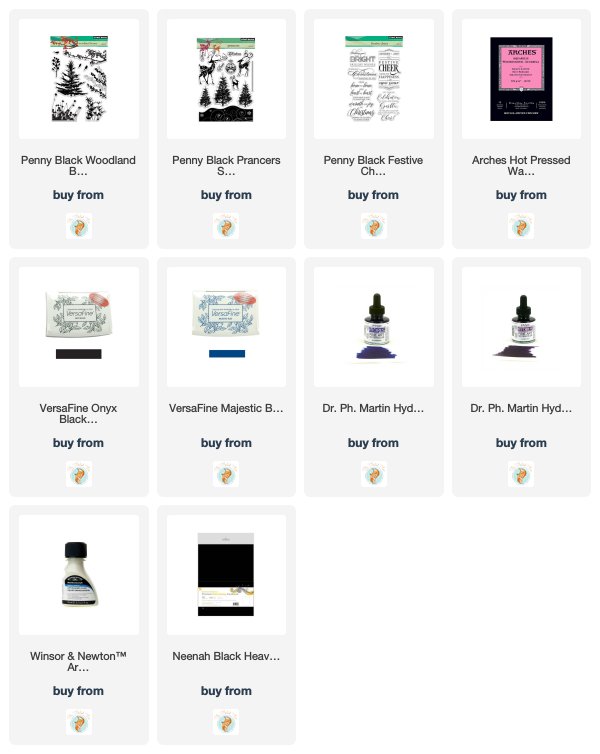 You have probably already caught up with the fact that Penny Black has two new collections of stamps and dies. When I first receive new stamps my head fills with ideas and designs to try and this time was no exception. I had a little pile of bookmark sized watercolour paper strips on my table so I decided to try some of my ideas on mini projects rather than full sized panels. That way I was able to play with a few stamps and several ideas in a short space of time. The strips I worked on have become the cards I’m sharing today and tomorrow. I have also had a chance to develop some of the designs into full sized panels. On the strip above I used an old favourite, the little tree stamp from the ‘Prancers’ set as background for the new birch trunk stamps.

I stamped the two trunks from the new ‘Nature’s silhouettes’ transparent set on watercolour paper already covered in spots of masking fluid. I masked the trunks with post-its while I stamped the fir tree in the background then painted colour at the top and bottom of the panel with a combination of brusho and distress markers. I added some shadow and twigs to the trunks to make them look more tree like.

On my second mini panel I masked a moon with masking tape then used distress stains to paint a blue and green sky over the splatters of masking fluid. I turned this into a little scene by adding the ‘Into the Sky’ stamp in blue and black ink. I love this delicate stamp of branches and decided to stamp it on both the bases for today’s cards. It mimics the twiggy branches on the birch trees above and continues some of the upward reaching branches in the panel below.

Spring in the city

I created this card way back in the dead of winter when I was using the ‘soft whisper’ tree stamp to create snowy scenes. I set it aside and it got buried under other projects. I need to post it now as Ottawa seems to have had its 15 minutes of spring and marched straight in to summer.

There is a lot going on in the scene so I had to think through my order of operations. I used the MISTI to stamp the tree several times adding black, grey and pink ink separately. When the tree was finished I stamped again with versamark then embossed in clear so I could easily paint a wash over the tree. I kept the variegated wash in the top half of the panel merging from blue to pink to apricot then stamped a skyline of grey buildings below it. I filled in the space around the buildings with pale grey ink then added black trees in the foreground.

I hope you are enjoying some pretty scenery where you are.

This one went in the mail this morning so there is no way it will get to where it’s going by Christmas but hopefully before new year. I used my new Dr Ph Martin Hydrus watercolours for the sky. I will write more about them once I have done some more experimenting. Sky, background and snow banks were done as described in this post but the black foreground tree was stamped last.

Hope all is calm at your place…

Reach for the stars

Today’s card reminds me of photos I have seen taken with a fish eye lense so the world all leans into the photograph. I could have added the colours of northern lights as I sometimes would but I stuck to the more common blues of a night sky. It was a fairly simple card to make. I positioned a circle mask then splattered masking fluid on a piece of watercolour paper, once the masking dried I painted blue gansai tambi paint in circles around the moon to fill the panel. To finish the card I stamped black trees and a sentiment, matted and added the panel to a black card base.

We have had some beautiful sunset skies lately; I haven’t taken many photos but I have tried to imprint them on my mind to recreate with paint and ink at a later time. It is weird to be into December and not have snow or even the need to wear gloves yet. No-one in our house is complaining about the lack of shoveling but my son is wanting to start on the outdoor rink and my husband is keen to ski. What does it look like where you are? White Christmas or green?

Stamping the stories: The Lion, the Witch and the Wardrobe

This scene is from a book, a whole series in fact, that is well loved by our family. I read the books to the children; they read them once they were able. We listened to the radio theatre series from Focus on the Family and when the movies came out we watched them. We knew the books so well that we were quite nitpicky about the movies but we enjoyed them despite the deviations from the original. If there is someone who does not recognize this little vignette, the series is the Chronicles of Narnia by C.S. Lewis. For those who recognised it straight away, which is your favourite Narnia story? My son’s favourite is ‘The Horse and his Boy, my older daughter’s ‘The Lion, the Witch and the Wardrobe, my younger daughter’s, ‘The Magician’s Nephew’ and for me ‘The Dawn Treader’ but ‘Last Battle’ is a close second. You see there is something for everyone. If you haven’t read them, get on it!

When the story begins it is ‘always winter but never Christmas’ in the magical land of Narnia. The white witch has made it so. Lucy meets Mr Tumnus the faun under the lamp post you see in the scene above. I painted it with distress stains over a generous splatter of masking fluid and used the ‘oh so useful’ trees from the ‘Prancers’ set in the foreground. I followed this card up with an art journal page because it was so much fun to paint.

This is the last of my stamping the stories cards; it has been fun to share them. Thank you so much for visiting and joining in the conversations.

Stamping the stories cards: Mary Poppins, Wind in the Willows, Peter Pan, Lord of the Rings