Stamping the stories: Wind in the Willows 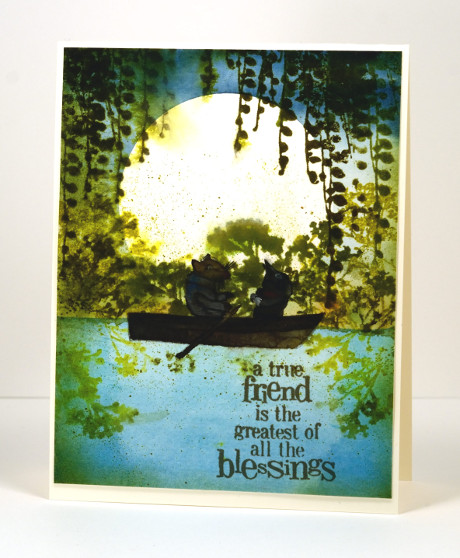 I was surprised how much I enjoyed this book. I don’t think I read it as a child; it was later when training to be a primary school teacher, reading all the classics and designing lessons and such. I am not that keen on animal books but this one is a delight; Ratty and Mole are such appealing characters. I read it to my children from a beautifully illustrated edition (Michael Hague once again) given to me by my Nanna on my 21st birthday. Some of the double page illustrations are incredible watercolours which surprise you with their intricate details.

I initially had the boat moored by the river bank with no Ratty and Mole in it but my daughter said I had to put them in. I did not have any suitable stamps so I had to paint them myself. Unlike the talented Sandy Allnock I do not find animals easy to paint or colour, let alone draw! I found an E. H. Sheppard illustration to assist me and did my best. I’m glad the moon is behind them; they are legitimately dark and shadowed. I realise the boat is backwards; I was so caught up in adding Ratty and Mole I put the oars in the wrong hands, ahem, paws!

Anyway, back to the beginning, I started by painting the river then positioned a large circle mask cut from frisket film before painting the sky. I removed the mask and stamped the foliage and spritzed it so it would bleed a little into the surrounding area. I let everything dry before I painted the boat and its inhabitants. I think the sentiment was just the right one for Ratty and Mole.

What are your favourite fantasy books? Do you even enjoy fantasy? Books about other worlds and magic lands have always intrigued me. I know Wind in the Willows isn’t another world or a magical tale but the animals do talk and go messing about in boats so you do have to use your imagination a little bit.

12 Comments on “Stamping the stories: Wind in the Willows”