Lately I have been die-cutting poinsettias from all sorts of different cardstock. I have a poinsettia Christmas card class coming up so I’ve been playing around with lacy paper, shimmer paper, kraft paper and watercolour paper with plans to also cut up some pretty plaid paper. These two cards feature a lovely cardstock called ‘Ivory WorldWin twist’ which is a smooth ivory cardstock on one side a lace texture on the other side. I bought it at Crop A While, my local scrapbooking store. The lacy side is almost spiderwebby but in a delicate pretty way not a ‘look what’s behind the filing cabinet’ way.

The card bases are neenah cream cardstock, and so is the sentiment strip and the PB ‘diamond cut’ behind the poinsettias. I used the PB ‘layered poinsettia die set’ for this trio of poinsettias; I like the size which makes it possible to fit three on a card front. (two more cards with these dies here and here) The PB jolly holly die cuts are a dark gold cardstock. I didn’t pop anything up on dimensional tape as it was getting pretty dimensional anyway with seven layers! That must be some kind of a record for me. I used glue for the flowers, narrow double sided tape for the diamond frame and stickit adhesive on the back of the holly.

The second card features the same cardstocks but a new PB poinsettia stamp ‘scarlet season’ which has both solid and filigree flowers. I cut them once again from the lacy cardstock and layered them over a funky rectangle die from ‘Ink to Paper’ and added the PB ‘joy’.

I’m not sure if it is the lacy paper or the colour combo but these cards have a bit of a retro look to them. I think these designs would be pretty with patterned vellum too.

As always the supplies are linked below; I have added a second affiliate with my Canadian readers in mind. The store is Scrap ‘n’ Stamp in BC. If you buy through my affiliate links from either Foiled Fox or Scrap ‘n’ Stamp there is no extra cost to you but I receive a commission.  Thanks for dropping by today. 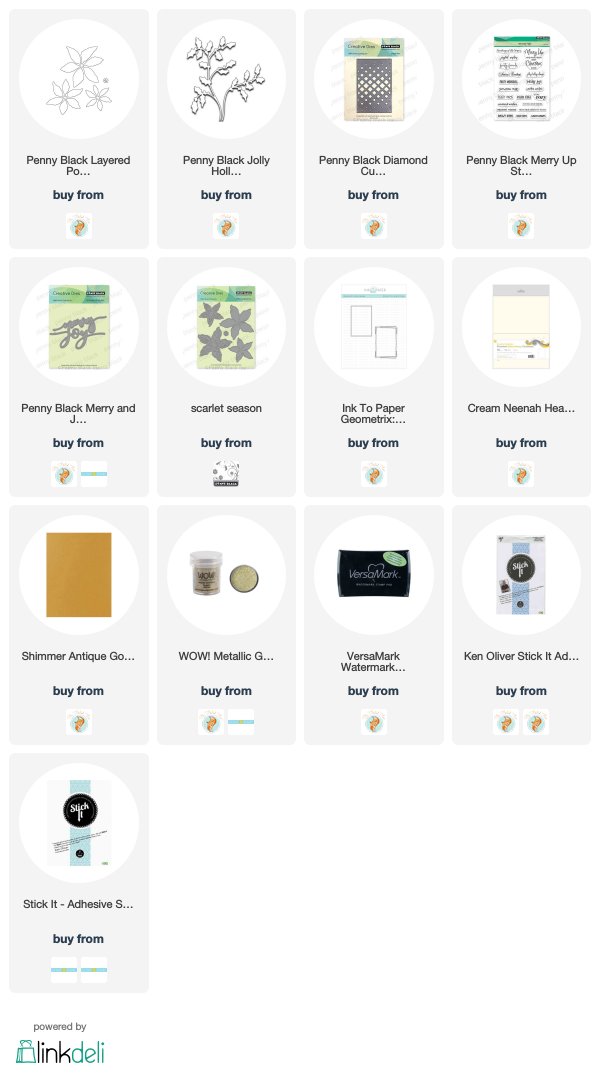 I liked that first layered poinsettia card so much I made another, this time with some pale green brusho to get the ‘white poinsettia’ look. I think I could go even lighter with my paint so there may be another poinsettia card to come. I started with watercolour paper splattered with masking fluid so I would have little white dots over the petals at the end.

I painted lime green brusho on the watercolour panel but it ended up separated into distinct areas of blue and yellow so I add a tiny bit of olive green brusho to get everything looking greener. When I die-cut the petals I tried to keep the smaller ones a little lighter and the larger ones darker.

Even though I was aiming for clean and simple when I lay the petals on a white card base, it was a little too stark. A layer of vellum softened the base and I splattered gold paint over it then added an embossed sentiment. Solving the vellum adhesive problem was easy under the die cuts and sentiment but the corners needed something too so I added just the tiniest amount from my tombow tape runner to hold them down to the card base.

Stay tuned because I think there are another couple of colour schemes yet to be tried with this pretty little die set!