All is calm under a brusho sky

I have painted quite a few expansive coloured skies lately. On Saturday I taught the last of my Merry & Bright class which included a bister night sky over a die cut tiny town. As I demonstrated the technique all of my skies were different and class participants also created unique and beautiful skies. Today’s card is similar in layout to the class card but instead of bister I used brusho and instead of die cutting I painted the little street with the help of a stamp from the ‘Gleeful’ set. I stamped the town first in versafine vintage sepia then added brusho and water to the sky area. I didn’t need to use much because the powder is so potent. I blended the blue and green with a brush and painted right up to the roof tops then let it dry. I used brown, blue, green and yellow brusho to paint the buildings and trees then finished the foreground with black brusho which separates into several colours. I added a tiny sentiment in versafine onyx black, removed the masking fluid to reveal stars then matted with a couple of co-ordinating colours.

Thanks for dropping by; I hope you have a great week.

Happy Thanksgiving to all the Canadians; chances are you are enjoying leaves in pretty colours like I am these days. I keep reaching for the filigree leaves set at the moment because it has six lovely leaves which can be stamped simply to feature the pretty filigree patterns or used as I have here to stamp an outline which can be painted for a more realistic leaf look.

My process for creating these three mini cards was as follows. I masked a square on cold pressed watercolour paper then inked the leaf stamps with two or three distress stains. I stamped then used a paintbrush to blend the colour and fill the leaf. Where necessary I added water but I worked quickly enough to mainly just move the stain. When the leaf dried I splattered some stain over the top and once that dried sponged a little ink around the perimeter to frame the leaf. (I did film myself on periscope using this technique and these stamps. Please be aware that the quality on periscope is not like youtube but you can get the idea of this process at the beginning of the broadcast)

I stamped the sentiment with versafine inks rather than distress because they do such a good job with fine lines.

I hope you are having a wonderful day; thanks for visiting. 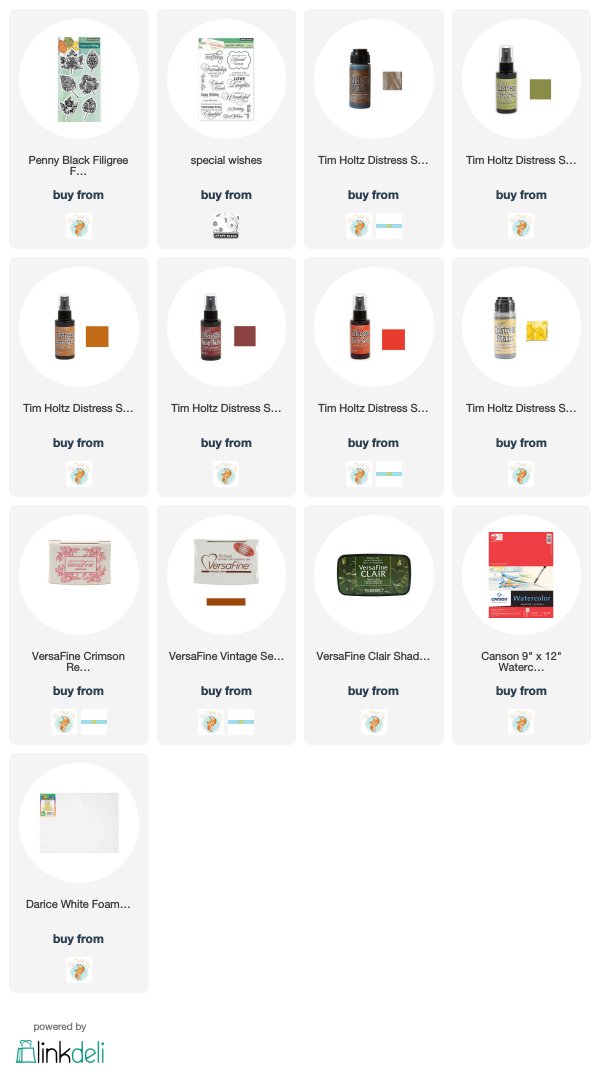 A couple of days ago I posted a autumn themed card created with the ‘snowy grove’ stamp; today I have a snowy one.  I only used two colours for this one which thankfully I wrote on the back of the panel because as is my habit I didn’t note down my technique straight away and now it is a bit hazy. The panel has been sitting around for a few weeks waiting for attention.

The panel was splattered with masking fluid first, you can see the fine white dots over the tree trunks. I then taped down the panel and positioned a frisket circle mask to create a moon. It makes more sense to position the frisket mask before splattering masking fluid so the dots of masking fluid don’t keep the frisket from sticking securely to the paper. With the moon mask in place I painted a blue sky with chipped sapphire and blueprint sketch distress stains. I let that dry, removed the moon mask and placed a hill shaped frisket mask lower down the panel. I stamped the snowy grove stamp over the mask then used a small paintbrush and both distress stains to give more definition to some of the trees. I also added shadow behind the snowbank with diluted blue stain. When that was dry I inked only some of the trees to stamp in the right hand foreground. I added a few snowy dips and a sentiment then popped up the whole panel with fun foam on a matching base. Edited to add: (I filmed a short video on periscope showing how I painted the trees. It will be up for 24hrs. It was my first periscope and is very amateur but I guess I can only improve)

I do love it when I see scenes like this in winter; I think a snow covered landscape is quite magical. But as I have said before I’m not wishing summer away at all. Last night I saw the most spectacular sunset I have witnessed in a long time. I was watching my son’s soccer game so was able to see the colours deepen and develop for over an hour. It was incredible. (I shared a few photos here.)

Snowy Grove (used on the card above) is one of my favourite stamps from the new PB release. I have already used it for a fall and a winter look and plan to include it in one of my upcoming Christmas card classes. To create this scene I created the soft gradation of colour behind the trees first by brayering memento dandelion ink over the bottom half of the panel and memento cantaloupe ink over the top half. I then inked the stamp with forest moss, gathered twigs and dried marigold distress inks and stamped. For the more watery blended look I inked the stamp again with vintage photo and spiced marmalade distress stains and stamped a second time (with the help of the misti). Because the stains sit on the paper for a while without soaking in I was able to grab a paintbrush and paint over the large trunks to fill in the empty circles that suggest snow. I pulled some of the stain down into the ‘ground’ area and, with some extra stain, filled the forest floor with brown stain then sprinkled some brown bister powder over the panel for extra texture.

By the way I have been enjoying watching a few amazingly artistic stampers create pretty things live or on replay using Periscope. I hope to film my first ‘scope’ some time this week. Maybe I’ll see you there. (If you haven’t heard of Periscope click on the link for a little overview)

Hidden Lane is a new scenic stamp which easily will transition from season to season. I chose autumn for my first stamping with it but I know I will reach for it when creating wintry and perhaps spring scenes also. I did the colouring for this little scene with several different mediums; the sky and grass were painted with watercolour paints, the trees and foreground were a combination of distress stains and bister and final details were added with watercolour pencils. The watercolour paper had been splattered with some masking fluid which gives the whole scene a slightly aged look. I think the sentiment which was probably intended for Christmas works equally well for Autumn which is a wonderful time of year and very beautiful where I live. Not that I’m wishing for it; as I’ve said before summer can stay as long as it likes!

I have something new to share today. There has been something of a Midas situation happening in my craft room. I brought home a Heidi Swapp Minc machine last week and warned my family that anything not nailed down was about to be foiled! It turns out their possessions are safe for now as I am currently experimenting with different ways to use the machine to do the type of foiling I want to do. I will share more over the weeks to come but I will say for starters that the Minc does a beautiful job.

As you know I have recently dived into watercolour powders and all the experimentation with them has resulted in a surplus of watercolour panels just sitting around waiting to be made into things. I pulled out one of those abstract panels and foiled a gold lily onto it using the ‘sun fire’ die from Penny Black. I am still learning and making mistakes so I won’t go into the how-to for today’s card but as I nail down the techniques that work for me I will share them here.

Prepare yourself for a little more shimmer and shine around here!