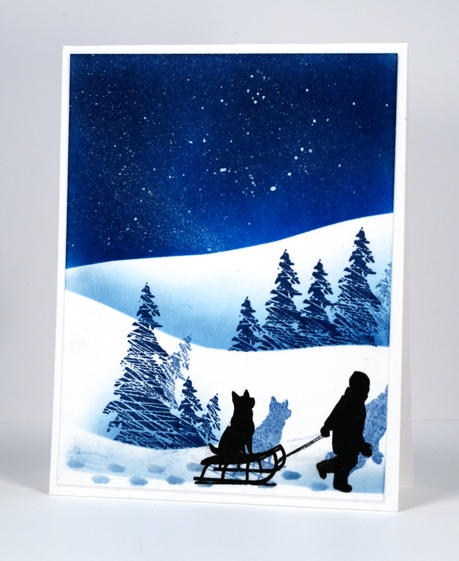 Even though we have absolutely no snow outside I felt inspired to create some snowscape cards today. I used two methods, the first sponging over a mask and the second painting the snow bank edge with watercolour paint and softening with it on one side with water.

The first card was sponged with Memento Bahama Blue and Nautical blue over masks cut from post-it notes. I added trees then stamped the boy and his dog in the foreground. I had not planned the card when I started so there was no masking fluid splattered on the sky for snow or stars. Instead I added it at the end by flicking it off the brush of a white wink of luna pen. The moon was not in my sky but I decided it must have been off to the left so stamped shadows behind the boy and the trees then sponged some little footprints too. 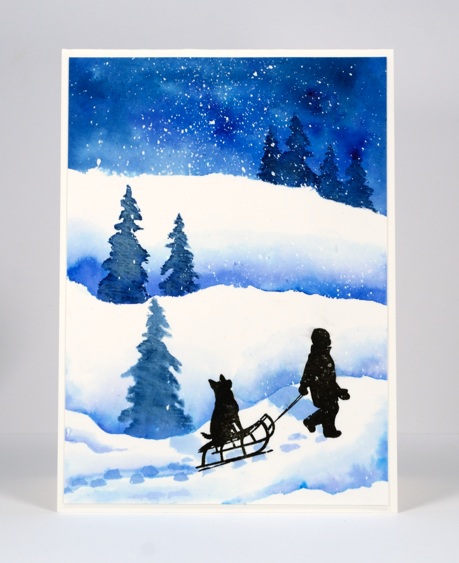 The painted scene was done on watercolour paper that had been splattered with masking fluid so snow appeared when I rubbed off the mask at the end. I painted the sky first with two different brusho blues then each of the snow banks. Once the painting was dry I stamped the trees and painted over them immediately to blend the ink into a more solid image. I stamped the boy in pigment ink then painted some shadows. I filmed the part where I created the sky and snow banks for each panel on periscope so it is available to watch here. I turned each panel into a scene later off camera. 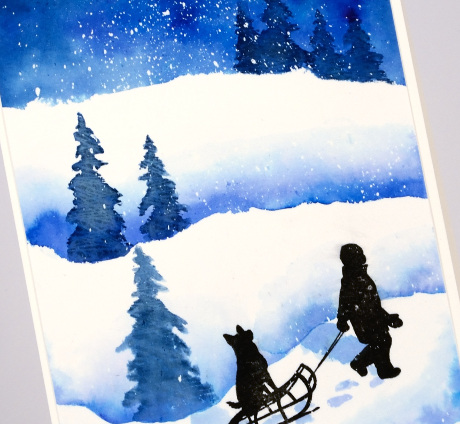 Thanks for dropping in today.

I can’t leave the leaves alone! I am very much a seasonal stamper when choosing my themes, colours and images. Of course I do stamp Christmas and winter images before the season arrives and spring designs are needed before the snow melts but when looking for inspiration I often choose what I see outside.

I embossed these leaves and watercoloured inside with Zig clean color real brush markers, two different reds and a brown. I coloured randomly and roughly then blended the colours with a waterbrush. I also added gold wink of stella to the mix and blended that with water. This gave the leaves a warm shimmery sheen which you can just see in the photo. (I shared the colouring and blending on a periscope here)

When it was all dry I coloured round the edges of the leaves with a grey clean color marker and blended that out with water also. To finish the card I matted with burgandy and added some gold thread and a sentiment.

Thank you for the kind words about my wrist; it turns out it is arthritis at the base of my thumb so I will be looking for ways to work smarter with both time and tools to ease the stress on the joint 😦

Have you seen all the pumpkins lined up in the fields waiting for…well I’m not sure what they’re waiting for, to be bought I guess, or to be collected. It is a sign of autumn to see them all there in their orange glory. I have never been a fan of orange but the distress stain, spiced marmalade, has softened my opinions a bit, it is such a rich colour.

I have two very similar cards today because I watercoloured one as a practice and then broadcast on periscope the watercolouring of the other. I scoped it yesterday so it is still available to watch on the web here. 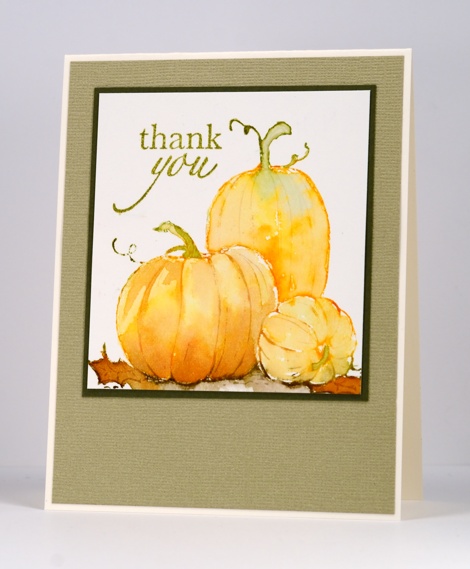 I used the same technique for both panels, inking the stamp directly with distress stains, spritzing it then stamping on watercolour paper. While the stain was still wet I used a waterbrush to pull colour from the outline into the pumpkins and leaves. Anywhere that I didn’t have enough stain to spread I picked up some extra from an acrylic block and painted it on.

Thanks for dropping by. 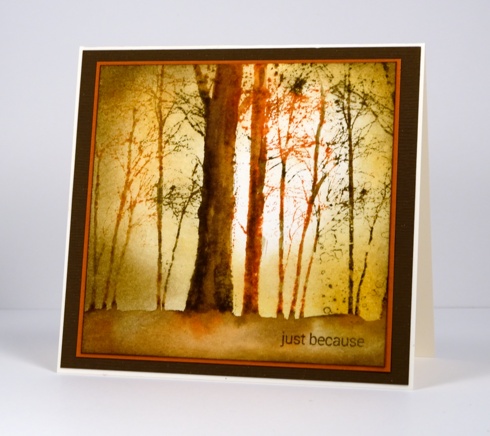 I have another card made with the beautiful new ‘snowy grove’ stamp. I filmed myself painting the trees on periscope so if you are quick you can catch that before it disappears forever. I intend to save some of my periscope videos and share them for longer on another site but I didn’t click the right button for that this morning. And maybe just as well because it was my first attempt and not my classiest presentation!

Anyway the technique is fresh in my mind so I will describe it here. I inked the stamp randomly with both walnut stain and rusty hinge ink. I stamped it on watercolour paper then used a waterbrush to blend the colour up and down all the trunks. The stamped impression wasn’t perfect but it didn’t matter because I painted over the trunks anyway. Once I had done that I painted the forest floor with the same inks and plenty of water. When it was all dry I sponged the background working in antique linen, wild honey and walnut stain, getting darker the further I moved from my ‘light source’.

Thanks for your lovely comments about yesterday’s card; can you tell I like this stamp!?