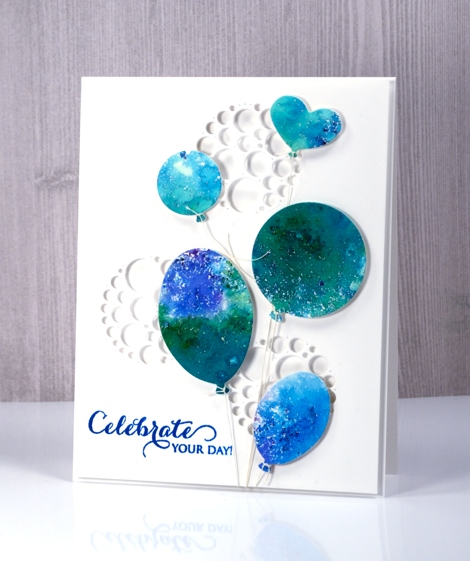 I have another card that utilises brusho experiments. If you have delved into the magic of brusho you probably have a pile of pretty brusho panels you don’t know quite what to do with. Experimenting with brusho is a bit addictive so it is rather easy to keep trying colour combinations with no project goal in mind. I decided to put a scrap of green, blue and purple brusho ‘mosaic’ to use as balloons. By brusho mosaic I mean the effect I get when I spritz over the sprinkled brusho only enough to activate it but not send it flowing all over the paper.

I used the ‘uplifting’ dies from Penny Black to cut out five balloons then added adhesive backed foam to each one. I cut circles of circles out of a panel of neenah solar white cardstock to create a background panel then cut circles from a piece of foam to position behind the panel so shadows would show inside the circles. The circles of circles are part of a new PB die set ‘stencil cut’.

I tied a linen thread to each balloon and tucked the other ends under the background panel. The thread tying took me close to my fiddliness factor limit but I persevered and assembled the layers and added a sentiment. This happy card would work for any celebration so I am adding it to the Casology challenge this week ‘Commencement’. 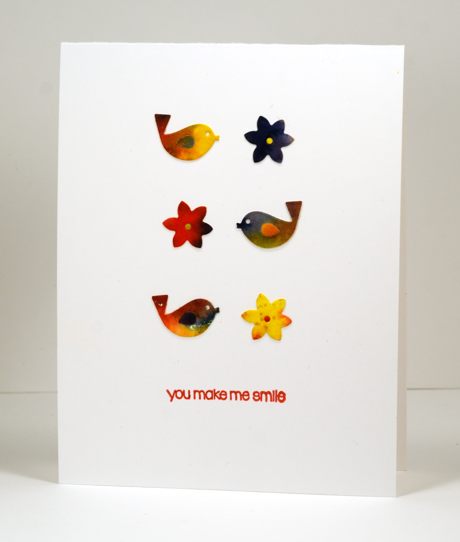 The theme at CASology this week is “Spring” and the sketch at CAS(E) this sketch is a 2×3 array. I had fun combining the two in the card above. 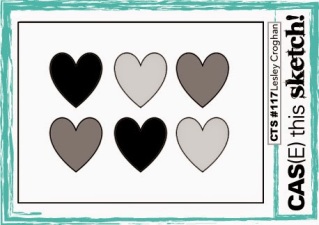 The watercolour panels were left over from my last class so I die cut little birds and flowers using dies from the ‘tweet things’ set to fit with the spring theme then arranged them according to the sketch. 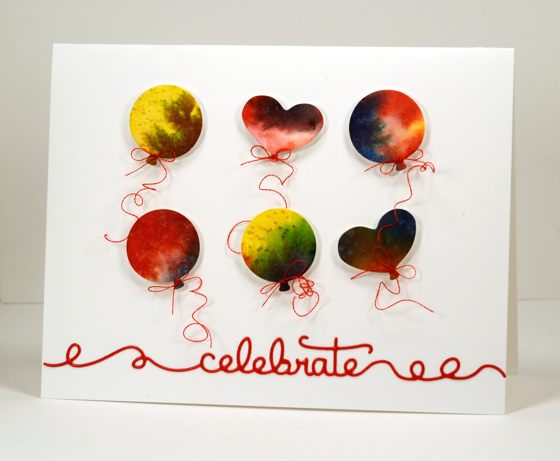 I don’t know that balloons are a spring thing but they do work perfectly for the sketch so I die cut some circle and heart balloons using dies from the ‘uplifting’ set, spent way too long tying six tiny bows of machine embroidery thread around the balloons then popped them up on dimensional tape. The embroidery thread is very shiny so I found the shiniest red cardstock I had and die cut the word celebrate from the ‘doodles’ set which works in well with the curls in the thread.

We had amazing spring weather yesterday; my girls and I went for a run in beautiful 15°C  sunshine. This morning we woke up to fresh snow so my husband skied this afternoon. Happy Easter everyone. 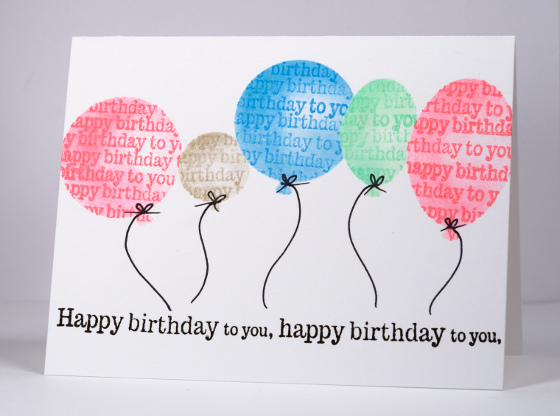 I am enjoying the Stretching Your Stamps 2 class and found a little time to try another technique this morning. I was inspired by another class participant who used sentiments inside speech bubbles to make a very cool card. I put mine inside balloons instead.

I cut balloons out of masking paper and kept both the positive and the negative. I was then able to stamp the words and sponge the balloon shape through the negative and mask the balloons after completing them with the positive. I used Radiant Neon inks which are so easy to sponge onto to a card. They blend and cover the area quickly and smoothly. The littlest balloon is stamped in gold but it looks more like a sad brown I’m afraid. I performed more stamp surgery to make this card by cutting the happy birthday stamp from “Edge to Edge” into three sections. I can always stamp them together another time if I want to.

You wouldn’t believe how long this “simple” card took me! It all started because I had a piece of watercoloured paper all sparkly and blue which wasn’t working in the way I needed it to for a project I no longer remember. I couldn’t let that pretty sparkly blue panel go to waste so I stamped something on it in black, again can’t remember what. That didn’t work either but I wasn’t prepared to throw the sparkly blue away so I die cut as many balloons as I could without getting black stamping on them. Most that I cut ended up with a little stamping so I tried 3021 different arrangements where one balloon would overlap another to cover little bits of black ink. Finally I realized I was going round in circles so instead I cut balloons out of plain but co-ordinating colours and decided on the design above. It took me three attempts to get the above card made without inky fingerprints and failed inlaid diecuts. Even this one is a little unbalanced; the balloons should be higher.

I like the sentiment and of course the sparkly blue that started it all.