Scene from my window

The Less is More challenge this week is a sketch challenge. It just happens to be a sketch of a layout I use fairly often so I was once again keen to play along. We have had ice, snow, rain, snow, freezing rain, snow…etc this week which, while treacherous for walking around, is very pretty to look at. When I got up yesterday the sun was not quite up but there was a line of yellow on the horizon and the rest of the world was snow laden and bluey grey.

This card is my attempt to recreate the scene.  I must say the scene was way more beautiful but it was fun to have a go. I masked the sides first and then stamped a row of trees in the background, the trees from Lovely as a Tree in the middle ground and the tree from Branch Out in the foreground.  I embossed the black trees and then drew the snow on the branches with a versamarker before embossing a second time. I added the colour by sponging and masking.

Thank you for all your lovely comments about the Berry Branch set of cards I made. I know there were several questions about how I made the winter card. I will try and do a tutorial soon or failing that at least give you some instructions – stay tuned!

Those snow scenes I love to do…

A couple of posts ago I featured a snow scene I did for the Less is More snow challenge. I love creating snow scenes but that one I entered in the challenge was not the first one I did that day. It was the fourth.  The first three are featured in this post. All of them are ok, but they were not quite what I was after. Snow scenes can be a little tricky at times.  In the one above you will see I managed a strange yellowy tinge in the sky; wrong sponge I think.

In the one below the tiny words in the sentiment are a little hard to read and the shadow on that tree? Well, it is hardly a shadow; I could have planned that a little better. 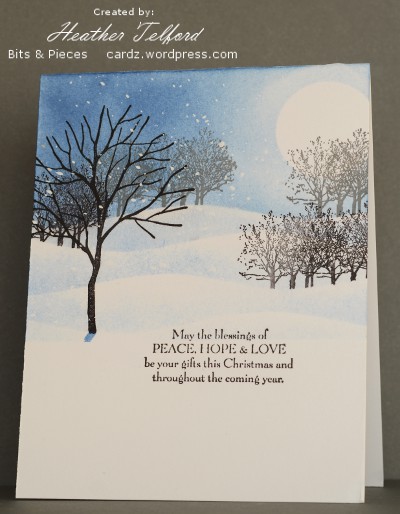 The card below suffered from a restamping of the foreground tree which didn’t really match up; I must have moved the positioning tool. To salvage it I used an embossing pen to draw snow on the branches but it is still a bit messy.

All that to say: sometimes it takes a few attempts before I come up with the scene I am after, but those attempts can often be used, as is, or with a little creative alteration.

Enjoy your day, still no snow here, but now we have plenty of ice!

I came home and created this card last Sunday after walking my son down to the park to play hockey on the rink with his buddies.  The snow was coming down very steadily and it was beautiful.  I decided to try and recreate the scene on a card. I know spring might be showing its face in some places but I think we have a bit of winter to live through yet.

I started with two masks and then flicked masking fluid all over the panel.  When the masking fluid was dry I removed a few very large blobs and positioned my horizon mask.  Instead of sponging I used my new soft brayer to create the sky.  I started at the left and moved toward the right as the ink ran out so I would have the impression of light and darkness.  After the sky was done I moved the mask a couple of times adding trees and sponged snow drifts.

It really does look a bit like this during a snow storm; even after 10 years here in Canada, I still think it is a beautiful sight 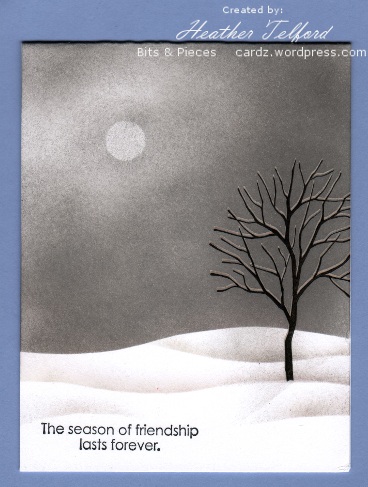 I guess they’re called challenges for a reason!  This week’s One Layer Wednesday challenge was to use a design sketch.  I tried several pretty flower themed cards before I settled back into the comfort of my sponged winter scenes.  I will post one of the flower cards later this week.  After cropping, matting and layering it was no longer anywhere near the brief for this challenge.

Several times lately I have noticed that an overcast day can look quite pretty particularly when the trees are still laden with snow.  The colour scheme tends to be very monochromatic though.  I tried to recreate that here with the sun weakly shining through the cloud.  It is not a particularly “pretty” card, but I thought it might be appropriate to send, with encouraging words inside, to someone going through a difficult “season”. 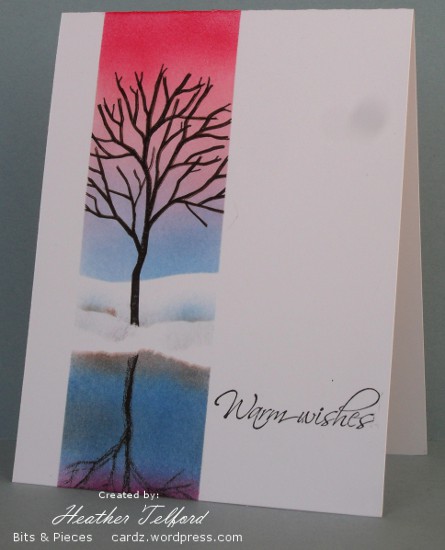 Yesterday I had a chance to create something for the One Layer Wednesday Challenge, hosted this week by Jennifer.  The challenge is to use a bare tree, bare branch or other vegetation just as long as it is bare.  That is not a hard ask for me as I have been happily stamping bare trees in snow for a month or so now.  When I looked back through my recent posts I realized the tree from “Branch Out has been appearing often.  I really think I need a few new trees stamps don’t you?

I decided to try a reflection in my scene this time; a winter tree, but one by an unfrozen pond or stream.  Any still water round here would have frozen solid last night as the temperature was down to 25 degrees below zero!   My girls went skating on the canal yesterday, something they ordinarily love to do, but the bitter cold took most of the enjoyment out and they spent the rest of the day trying to warm up again!

The edges of the image panel were masked with post-it notes as were the horizon and water’s edge.  To create the reflected tree I stamped it on the plastic square that came with the stamp-a-ma-jig and pressed that onto the sponged water.  (I am sorry about the smudges on the photo, they are on the lens of my daughter’s camera)

If you haven’t already browsed through the OLW36 submissions check them out on Jennifer’s blog, there is plenty of inspiration to be found there.

Moon on the horizon 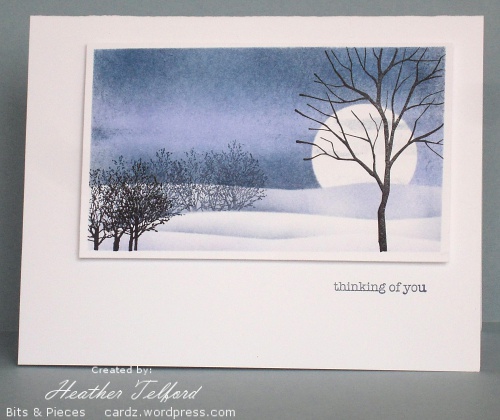 The Clean and Simple challenge at Splitcoast this week is A Day in the Snow.  It may be stretching it a little but here is my scene at the end of a day in the snow or perhaps the beginning, before all the fresh snow has been played in!

When I was in the CAS101 gallery looking at the cards already posted I noticed an “enough already” card!  I can understand the thought but here in Ottawa our snow disappeared and we had to start again so I am looking forward to more this weekend! 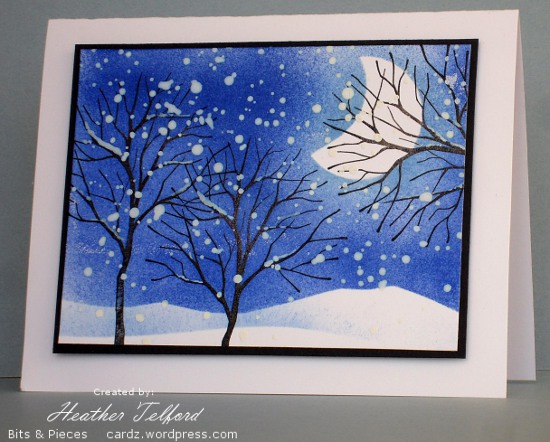 Happy New Year everyone.  I started a post yesterday featuring some of my favourites from the cards I made over the last year but I didn’t really have the time to put it together so I decided to give you a new card instead.  If you want to look at some fabulous favourites from 2010 take a look at the CAS Best of 2010 thread at Splitcoast today.  It is overflowing with inspiration!  Thank you to those who shared their favourites and thank you to those kind people who listed a few of my cards, it is a thrill to make the list.

At this time of year the scene in the card above should typically be what I see out the window.  Instead we have had fog and rain all day.  The thin layer of snow we had is fast disappearing and green grass is evident.   I will keep posting snowy cards in the hope that they soon resemble the view from my front door.

My technique was the same as usual for this snow scape card, but I used more dramatic lines and colours. Once again I added snow after all the stamping and sponging was done by splattering and painting with a mix of acrylic paint and water.

Thank you for all your kind comments about the tutorial,  and thank you, Sue for emailing a picture of your lovely card.  As promised I put all the names of those who commented in a draw for the original card and I asked my son to pull a name out of a hat yesterday.  The winner is… Janet Kay.

Janet wrote:
OM Goodness, you make it look easy, I have to try it! Thank you so much for sharing your talents! I love the card!!!

I will be in touch to get your address, Janet so I can put the card in the mail for you. 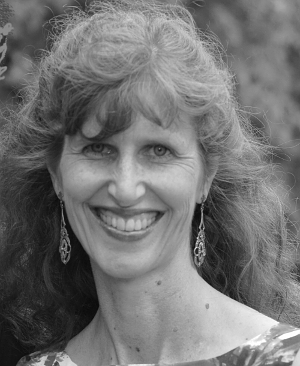