← For the grad
Birds, blooms and balloons → 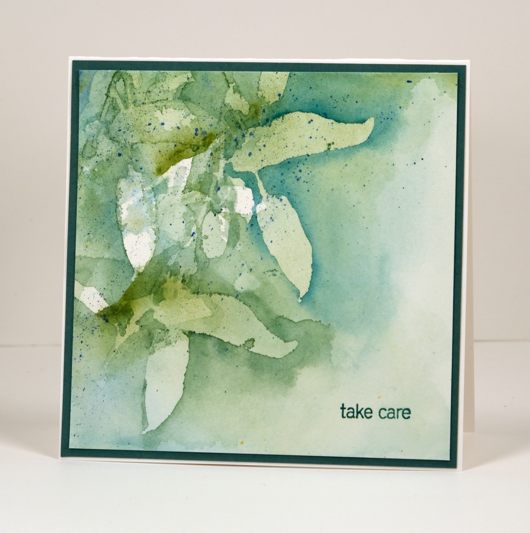 I am enjoying my new watercolour paints and experimenting with different ways to use them. The panel above is part of a masking experiment. I used the ‘happy news’ die to cut a mask from frisket film. Frisket film is made of plastic so I ran the die back and forth through the machine a few times to make sure it cut well. I saved both the negative and the positive die cut image and worked on two panels at once so one could dry while I painted the other. For the one above I used just the positive leaf and branch portion of the die cut image.

I pressed the frisket film leaves firmly onto hotpressed watercolour paper and painted some greens and blues around the leaves. The shape of the leaves reminds me of gum leaves (eucalyptus leaves) so I stuck with the muted blues and greens I remember from the gum trees in Australia. Some paint did seep under the frisket film in places but I didn’t worry as I knew I was doing several layers anyway. When the first layer was dry I repositioned the mask and repeated the process. I think I repositioned the mask three times; I’m not sure. By the time I had painted several layers the first white masked leaves were almost completely covered in paint but the outlines were still distinct. I added some splatter, a sentiment then matted in a co-ordinating teal cardstock.

The other panel I was working on used the negative frisket film mask and will be on the blog next week. Thanks for dropping by.