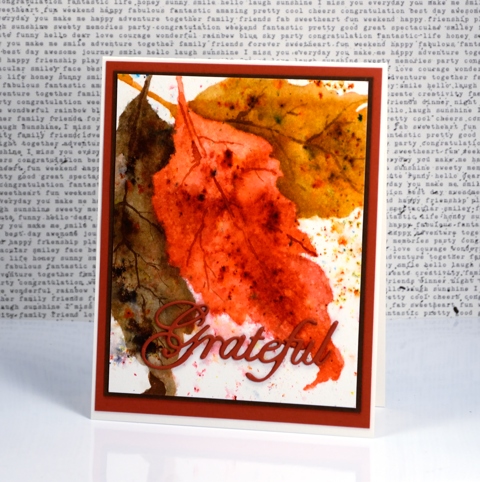 I think brusho paints are the perfect medium for autumn leaves. The variation in colour from even one little tub of brusho reminds me of the beautiful variation in autumn leaves. Brusho can be blended for smooth transitions from light to dark or left unblended which ends up looking like the blemishes found on many leaves. When deciding how to paint the new leaf stamp, Poetic, I knew brusho would help me achieve the look I wanted. 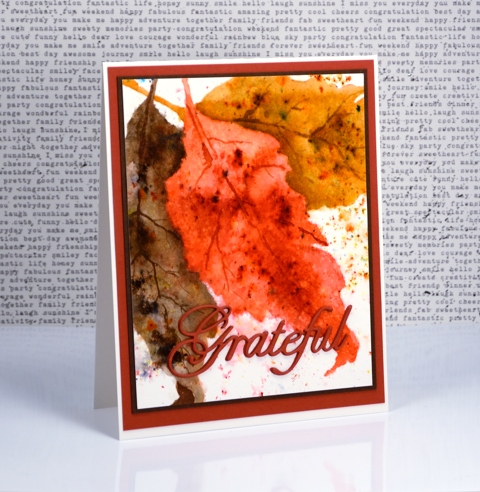 I started by stamping the leaf three times on hot pressed watercolour paper in Morocco memento ink. I overlapped the leaves but without re-inking the stamp so I ended up with one dark leaf (foreground) and two paler leaves as my guides for painting. I painted the leaves from left to right adding one colour of brusho to one leaf at a time. I sprinkled dark brown on the first leaf and used a waterbrush to blend it out to the edges of the leaf keeping some areas variegated. I dried the leaf completely before starting on the second one with terracotta brusho and following the same process. Again I dried the panel completely before doing the final leaf in sandstone.

After I had painted all the leaves I sprinkled a little of each colour of brusho over the corresponding leaf and spritzed with water from above. The result was some extra texture on the leaves and some colourful splatter over the edges. To add realism I used a fine brush to paint some veins on the leaves. Finally I created a stacked die cut of the word Grateful and matted in dark brown and the same rust as for the die cut.