Having so many alcohol ink experiments on hand is helping with my resolve to try new layouts and sketches. The colours and patterns that appear almost magically when working with alcohol inks need little or no adornment. This panel was mainly aqua with some splotches of coral pink here and there until I added silver and scraped it across the panel with the coffee stirrer. I ended up with the rock formation style patterns which were kind of cool but the silver had taken over.

I played around with several ideas for using the panel including tossing it but finally settled on a layout inspired by this card on JJ Bolton’s blog. I chose the coral coloured cardstock for the die cut to bring out the few patches on the panel. The assembly of this layout did not go smoothly for me, (there is more than one reason I stick to the portrait gallery layout!) I cut a piece of light weight cardstock to stick behind the circle to keep everything together. When I ran my finger over the edge of the circle to press it firmly onto the backing, the silver ink smudged onto my clean white card base. I managed to transfer silver ink via my die cutting plates also. The metallic alcohol inks sit on the surface and therefore need some sort of fixative; (I have watched a tutorial about this just haven’t looked into whether I have the right fixative) Rather than make the same mistake three times I decided to polish the patterned circle with a paper towel as someone had done successfully in class to see how much silver would come off. I removed quite a bit which revealed more aqua and left the panel less smudgy. The rest of the assembly was more straight forward; I used ‘stick it’ adhesive on the back of the folk flower die cut and embossed the sentiment on black cardstock for contrast. 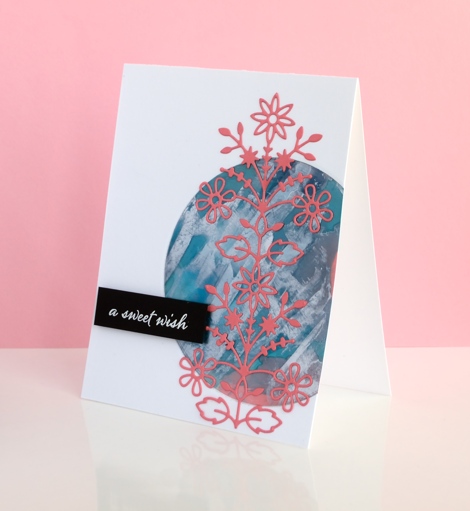 When I visited JJ Bolton’s blog to look at her card layout I read about the clever wax crayon technique she used on her card…something to try another day.