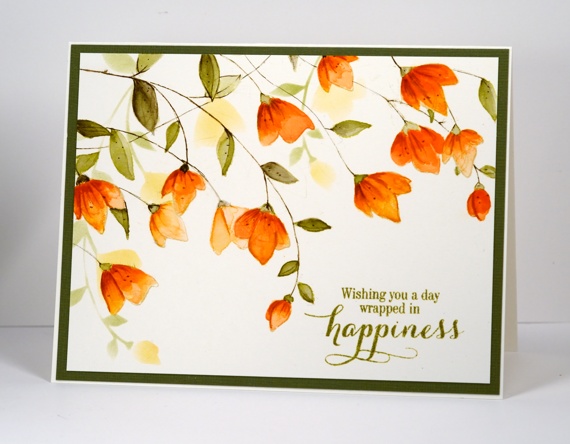 When I set out to create this card I knew I had stamped a similar layout with this stamp before but it wasn’t until the card was completed and I looked at the earlier card that I realised just how how similar! This one has a wee bit more going on and was painted with distress stains not watercolour pencils. I began by stamping the large ‘Softly’ stamp a couple of times. Each time I inked it I wiped off some of the antique linen ink so the two imprints would not interfere with each other too much. The antique linen ink is pale so I was able to paint inside the lines and have them disappear into the darker oranges and greens.

I had to repeat my mantra (walk away, just walk away) periodically through the making of this card because I was trying to follow the steps shown on this photo tutorial. I painted all the petals with a diluted wash of ‘dried marigold’ distress stain first. After it dried I added another layer keeping the colour undiluted. Once that dried I painted some darker areas with ‘spiced marmalade’, let it dry then finally added some ‘rusty hinge’. ( I have just discovered what a warm brown rusty hinge is; it works well with orange tones). After waiting once again for it to dry I added some details with the spiced marmalade and rusty hinge markers. I stuck with just ‘forest moss’ stain for the leaves but began by diluting for the first wash then increasing the intensity as I added shading.

When all the painting was finished I used the co-ordinating stencil ‘Promenade’ to sponge some background flowers before adding a sentiment and a green mat. This card is a little bigger than A2 (6.25″x4.75″) so I will need to hunt through my envelope supply to find a match.

Thank you so much for dropping by and for your kind comments. I have been interested to read about your opinions and experiences with the different watercolour powders I have been featuring. 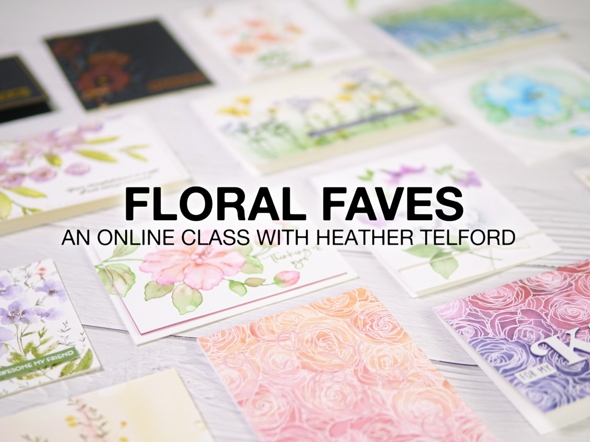