I am flitting back and forth between poppies and alcohol inks at present; I hope you don’t mind. Jane Clempson is continuing to create inspiring alcohol ink projects over on her blog so I have a list of techniques yet to try.

This one started out the same way many of my panels have with me dropping three colours randomly over the whole surface of the yupo paper. Once the colours settled and stopped jostling each other I started dropping blending solution here, there and everywhere. It made some pretty patterns but nothing I hadn’t tried before so I switched to splattering blending fluid over the panel with an old paintbrush. The droplets were smaller and more numerous and achieved the bubbly look you see here. 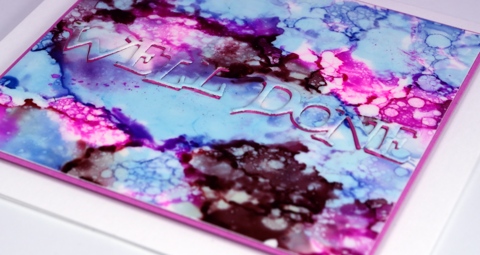 I was inspired to position my sentiment front and centre after seeing this card by Jane. I die cut the sentiment from both the patterned panel and a piece of pink fun foam (both with stick-it adhesive on the back) so I could position the fun foam in the space left by the die cut  and then the inked die cut back on top of the fun foam. Looks simple described in print but in reality it drove me crazy working those fiddly little words into the fiddly little spaces with a fiddly little pair of tweezers! Cute effect though, don’t you think?