← Gold leaves and sharpies
Watercolour with a stencil → 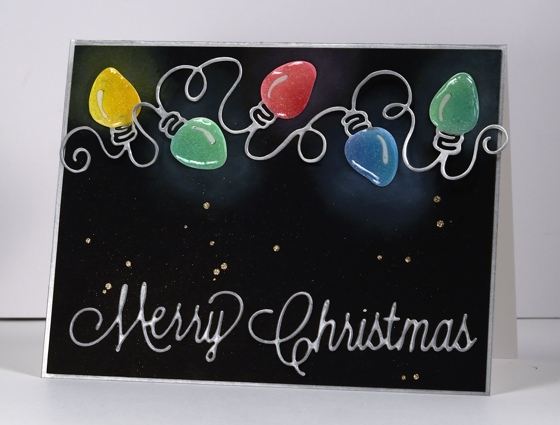 I had fun creating this little string of lights. I cut several strings of lights with the “Sparkle String” die and experimented with colouring techniques. I decided on the radiant neon inks because the colours are so soft and pretty. To colour the lights I left them in the negative die cut with a bit of tape on the back to keep things from moving around. Before I coloured each light I removed the little white highlight and set it aside. I sponged each light in a radiant neon ink then darkened the left side with a slightly darker ink. (To Electric Green I added Electric Blue, to Electric Yellow I added Electric Orange, to Electric Coral I added Memento Luxe Love Letter, to Electric Blue I added Electric Purple.) I added a bit of sparkle to each bulb with a clear Wink of Stella pen then slotted the white highlights back in. The cords between the bulbs and the die cut sentiment are coloured with a silver sharpie. My finishing touch for the string of lights was glossy accents on each bulb which made them all quite shiny and raised.

I decided to set the lights on a black background but wanted “glow” around each one. I tried the sponging the neon ink directly onto the black cardstock but the colour was not light or bright enough. By sponging with white pigment ink first I provided a white base for each bit of neon sponging. I glued the bulbs to the black panel but  not the cords so some of them are  raised a little. To attach the Merry Christmas I used a Scrapbook Adhesives Transfer Sheet before die cutting. When it came to sticking it down all I had to do was remove the backing and press it down onto the black panel. 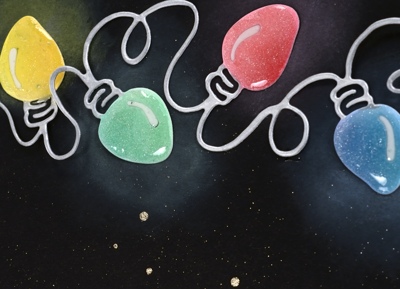 Since I am showing you my sparkly light card I thought I would share a card my son made the other day. In our latest bit of sorting and organizing he found a set of stickers I had bought him long ago. The set had several instruments but he just used the drum kit and amp. He added the lights, the rack for the lights, the sponging and the little cord and power outlet himself. The coolest feature of this card however is the way it lights up.

Inside he attached a small battery operated light which shines through the holes he punched for the floodlights! 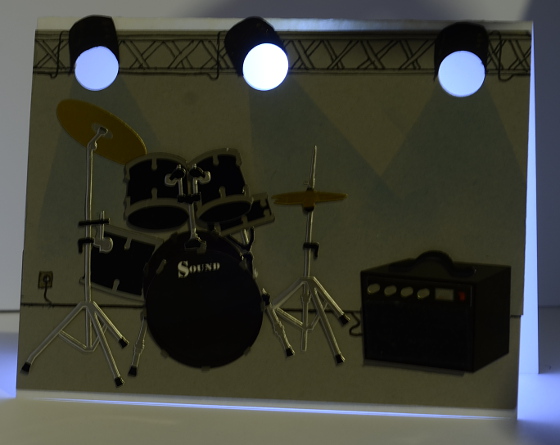 Thanks for dropping by and thanks for the responses to my latest video. I know my videos are few and far between so I appreciate your positive feedback very much.