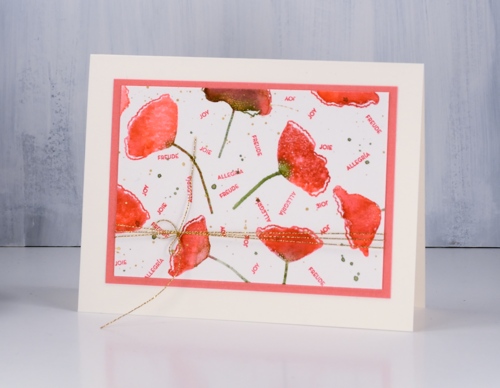 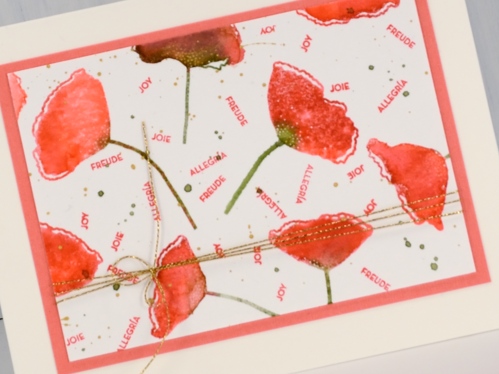 After making a gift set of cards with the ‘blissbloss’ stamp I was inspired follow the same process with another stamp set. This time I used Alexandra Renke’s pretty poppy stamp set and her poppy dies. I used Catherine Pooler inks for the watercolour effect on the poppies and for the tiny sentiments.

I started with a 10″x7″ panel of hot pressed watercolour paper. There are five poppy stamps in the set so I positioned them randomly over the panel while in the stamp positioner. I inked the petals first in samba ink then dabbed some rockin’ red ink on the sides or edges but not covering the whole flower. I spritzed then stamped. I wiped off the stamps then inked the stems in eucalyptus ink and stamped again.  I moved the panel and repeated the process to fill the panel with poppies. In order to get even spacing I had to clean and reposition the stamps a couple of times but eventually I had the panel covered. At this point I changed my mind and crowded in a few more flowers in a couple of areas using the CP bellini ink along with CP samba to make paler poppies.  I added some eucalyptus ink splatter and some gold splatter using one of the gansai tambi gold paints then called it complete.

To create the cards I cut some panels to 5 ½” so they would stretch the length or height of the card and used co-ordinating cardstock to frame and mat the panels. I also cut several poppies using the Alexandra Renke poppy flower dies in light peach, dark peach and light gold cardstock. I don’t have a formula for creating five cards from the panel; basically I played with ideas until they looked ok! 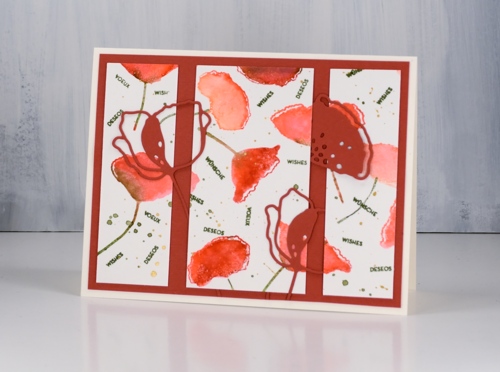 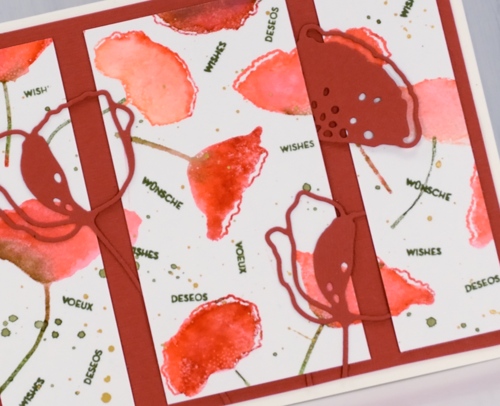 The poppy stamp set has the same seven sentiments in English, French, German and Spanish so I stamped sentiments on a few of the panels using the same word in four languages to fill spaces between the poppies. On one card I needed a larger sentiment so I used a Penny Black stamp from the ‘happy  snippets’ set.

I used light weight vellum over one of the watercolour panels to soften the colours and make the die cuts stand out. 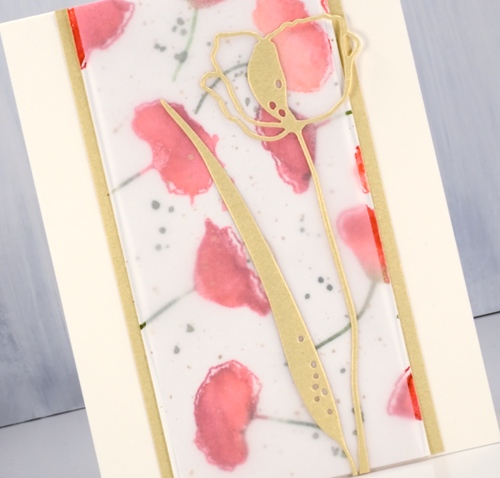 I’m hoping to sell cards at a market in the not too distant future so having a few gift sets might be a good idea.