Two couples we know have had baby girls in the last week, so it was time to reach for some  pink.    I have seen many cards featuring a little baby carriage made out of a circle.  I mixed it up a little and went with an oval instead.  The paper is Bella Rose, the lace is from my lace basket and the wheels from the Boho Bckgrounds set.  That’s it.    It took me too long to settle on this design, but I should be able to reproduce it very speedily, and in whatever colour scheme I like!

I used the three little words set at a friend’s house and brought home the two white stamped pieces to make into a card later on.  The inside piece just says “thinking of you”.    When I pulled out the white pieces I couldn’t decide what to add.  I knew I wanted a CAS look but none of my picture stamps seemed to be appropiate.   In the end I decided against pictures and just used the gold and black combination and, to add a little feature, the circle from Boho Backgrounds.

This card is a bit of a departure from the soft spring designs I have been creating lately.  I wanted to use the beautiful digital paper designed by Jak Heath, and decided not to reach for red as an accent colour but teal, a colour I rarely pull out.  The layout is a sketch by Kurt on StampTV.

I embossed the  flowers on the black cardstock with white e.p and stamped the other flowers with black or teal, colouring one in with a teal marker and adding a rhinestone to the other.  Not my usual style, but it is fun to try something a little different from time to time.

Sharon issued another great stamp simply challenge last week at No Time to Stamp. We had to complete our project using black, white and one other colour. I chose Certainly Celery. This was one of those cards which just evolved as I stamped. After I stamped the background stamp from Boho Backgrounds it made me think of a piece of dress fabric so I added a ‘sash’ and a ‘buckle’. Once again I found a sentiment in the rub-ons. It is worth buying the rub-ons just for all the extra words and greetings. 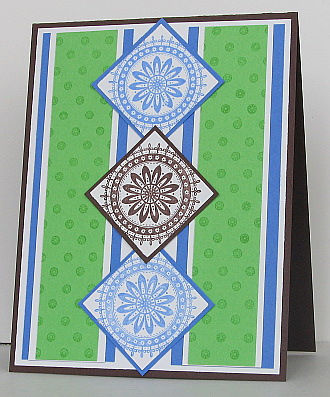 My inspiration for the colours and some of the layout was the Home Depot Dream book that appeared in my letter box the other day. I was flipping through looking at some beautiful rooms realising that in front of me were some ready made colour schemes and layouts.

Beate’s current weekend sketch features six rectangles, this is my take on it. One of the rectangles became a little blue flower in my version, I didn’t want to cover any of that intricate circle in the middle. It was only when I finished that I realised in the three weekend sketch challenges I have participated in so far I have used the same set. It wasn’t intentional, I will force myself to reach for something else next week.

I thought this card would come together easily as I was using Tuesday’s colour challenge CC155 from Splitcoast and Wednesday’s sketch challenge SC165. I did not need to choose colours or layout; that was done for me. Unfortunately it still took a while as I played with mattes and sizes and patterns. I do like these colours together, it is just a slight variation on the two colour designs I have been doing lately. The background stamp on the top right rectangle is stamped in black and the petals coloured with a not-so-healthy, white gel pen. You get the idea, but it would probably pop more if the white petals were brighter.

I had this design in my head before the stamps arrived so it was fun to see if it would work once I received them. Stamping the Boho background stamp across the rectangular piece diagonally gave me a path of flowers on which to lay the larger ones from the One of a Kind set. I stamped a few flowers in Ruby red on white card and embossed some in white e.p. on Ruby cardstock. I punched some out with the coordinating punch and others I cut by hand before arranging and sticking them down. White eyelets are added to the centres of three. 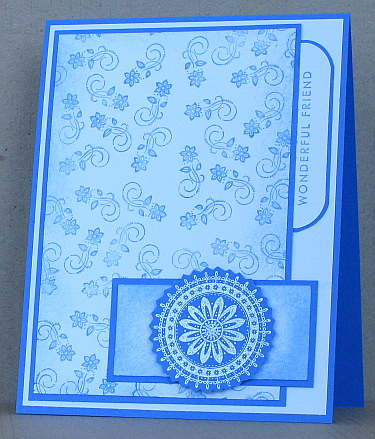 I have had a chance to play with one of new sets, Boho Backgrounds. The fine detail on the stamps combined with the Ballet Blue ink and cardstock reminded me of patterns on china plates. The layout is my take on Beate’s Weekend Sketch. I have sponged the edges of the large rectangle and the most of the small rectangle. To highlight the flower circle I embossed in white and raised it with stampin’ dimensionals. Punching out the circular image with the scallop punch from SU would have been quicker than cutting by hand but I don’t have that punch!